Vegas and the Mob Cosmic Blast

A Simple Song by Melody Carlson

Join Harris Gray, authors of the horror book, Vampire Vic, as they tour the blogosphere May 6 – July 26, 2013 on their first virtual book tour with Pump Up Your Book! This tour is part of a huge Kindle Fire HD Giveaway. If interested in signing up for a review, interview, guest post, or book spotlight, please let us know by contacting Tracee at tgleichner (at) gmail.com or leave a comment below along with your contact information. 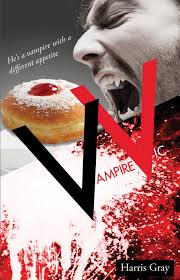 Would you give up donuts…for blood?

Fat, balding accountant Victor Thetherson hoped becoming a vampire would turn his life around. But Victor can’t stomach confrontation and gets queasy at the sight of blood. Instead he gets it from the blood bank, diluted in bloody Bloody Marys. The result: a vampire who doesn’t bite, and a man who gets no respect.

Victor’s slacking staff mockingly calls him Vampire Vic. Victor’s boss amuses his wife by intimidating Victor on video. His ex makes him stay out late while she entertains boyfriends in the house she insists they continue to share. One night it finally boils over, and Victor bites someone. And then another…and very soon, he’s no longer visiting the blood bank.

Muscle replaces fat, and his comb-forward widow’s peak takes root. Victor basks in newfound attention and respect, at the office and at home. But real vampires get hunted, and as the transformation reaches the tipping point, Victor must decide how much he’s willing to sacrifice for the power of the vampire.

Harris Gray finish their third pint and mull over their next writing project, simultaneously deciding on a vampire book. Because the women in their lives eat up every vampire story on the shelves. And for the gratuitous T&A. But hunky, smoldering vampires are beyond their grasp; and dammit, T&A should mean something. Deciding to write what they know, Harris Gray return to their wheelhouse: An aging, uncomfortable man, not so happy with his lot in life. A man bitten by a vampire, unsure what to do with his new…skillset. Vampire Vic – VV – is born. Perfect.

The latest book is Vampire Vic.

First Chapter Reveal!  Want to get a taste of this book?  Read on!

I am Vampire Vic. For two years they’ve been asking for it. Tonight, I will own it.

So thought Victor Thetherson, leaning forward so that he could just see the back of the head and shoulders of his employee, David Copperfield. Unfortunately not the magician.

Friday, 4:52 p.m., the close of a terrible week. Victor had caught hell for budget overruns on a big project, and now they were two weeks late on a report due to corporate. And yet his accounting staff had seen fit to knock off early for happy hour, leaving the office nearly deserted.

I can do this. I am a vampire. One bite and we’ll both be changed, for the better. David needs it…

At the very least, David deserved it. He had been “putting the finishing touches” to the overdue report for the past two weeks. Victor had spent so many of those three hundred and thirty-six hours peering through his small office window, he saw David’s framed, silhouetted bust when he closed his eyes.

David capped a series of chair stretches by limbering up his veiny neck like a boxer about to answer the bell. Victor practiced some vampire speak to amp himself up.

Insolent pup, do you think that extra layer of muscle will stop my razor-sharp fangs from plowing into your throat!? Go on, David Copperfield, stand in front of the gym mirror and grunt your way through another set of shoulder shrugs—your blood will spill no less easily! Your fit heart will only pump the blood all the quicker into the ravenous mouth of the vampire!

Victor gagged at the thought of a mouthful of warm blood and clamped his hand to his mouth in case retching progressed to hurling. Put his head to the desk and thought about assets equaling liabilities plus equity, and when that didn’t work, bunnies wrestling kitties (bunnies victorious), until the spasm settled, leaving behind a sheen of sweat on his desktop and a bad taste in his mouth.

What is wrong with me?! Why do I suck so bad?

I don’t suck, Victor reminded himself. That’s the problem.

David mouse-clicked with a theatrical flourish and shut off his monitor, tidying his desk for the weekend. With a snarl Victor jumped to his feet. I can do this! Time to suck, in a good way.

Wincing on the pin pricks of an early-stage limb nap, he shook his leg until blood flow resumed and hobbled to yank open his office door. Like magic, David Copperfield was standing there.

“G’night,” said David, gym bag slung over his shoulder, otherwise empty-handed. He leaned to the side to check his reflection in the window. “Whew!” His eyebrows elevated to theatrical heights. “What a week, huh?”

“David,” Victor said as pleasantly as he could.

“Sir,” David said with a hint of happy sarcasm.

Oh boy does he deserve it. Victor bolstered his resolve while noting that David had spritzed himself with another few bucks’ worth of Beckham. Would there be time to wet-wipe his throat before the bite? “The Westchase report?”

“Got it right here.” David hustled back to his desk, returning on a jog. He handed Victor a file folder.

It was suspiciously light. “The bulk of it is electronic…?”

“You got a classic case of monitor strain going there.” David air-traced the stress lines around Victor’s eyes. “Your generation never evolved the ability to survive in the digital age.” He nodded at the thin folder and stuck a piece of Juicy Fruit in his mouth. “So I kept it old school for you—that’s the whole kit and kaboodle, VV.”

Upon entering the office the next morning, Victor’s physical changes made it obvious he had become a vampire. He was met with fear, excitement and wonder. But when he didn’t bite anybody, when he was overheard stuttering on the phone as his boss chewed his ass for missing another deadline, it was a return to business as usual. With the addition of his new nickname, Vampire Vic.

Victor showed just a smidge of one of his fangs. After tonight, the name would have a whole different vibe.

David’s hands hovered over his perfect coif like a gypsy at her crystal ball, sensing static frizz. He nodded at the can of mousse on the far corner of Victor’s desk. “May I?”

“You may not.” Victor opened the Westchase folder. “David, Jeez…” He caught himself in time; his boss frowned on profanity. “…geez whiz. All you have here is a few bullet points.”

“Did I forget the cover page?”

“No,” Victor squawked, brandishing the folder’s entire contents, bullet points in one hand and cover page in the other, for David’s consideration.

“I know, right?” David joined Victor in his outrage. “That was a bitch of an assignment you gave me.”

“A bitch of an assignment?” Victor chirped. “The audit was done in June. This was a task you were given three weeks to complete. Followed by two one-week extensions. I could have finished this audit report in three days.”

Victor couldn’t prevent his head from slumping against his office door frame. If he bit David now, the report would be another week late. He couldn’t afford to give his boss any more ammunition. He waggled the folder. “We have to finish this tonight.”

David was clearly upset. “Let’s get another extension.”

“No, David, no. Jay called three times today, looking for this Westchase report. I promised him he’d have it by the end of the day.”

“Why would you promise that?”

“I promised it, because this morning when I asked you if the report was almost done, you said yes.”

Victor growled softly. David looked uncomfortable, fidgeting and grimacing. Was he suddenly realizing the danger he was in? Regretting this day, and his whole wasted life? Petrified at the prospect of being held captive after hours in an empty office building, with the vampire?

“I don’t know if this is jock itch, or something else, but I should spray it with some Tinactin or something.” David stood on tiptoes to survey Victor’s desk.

“No, I don’t have anything for that.” Victor was recalibrating his attack. They would pull a college-esque all nighter, standing over his computer together just before dawn, both of them bleary-eyed and celebrating the satisfying click of the Send button. He would bid David adieu, and then jump him at the door to his Mini Cooper, drink him dry and send his soul to Hell. “Let’s see your audit workpapers.”

“They are right there, my man,” said David, pointing at his desk drawer. “Don’t wait for me, I’ll hit the ground running as soon as I get back from the drug store.”

“Vic, I gotta,” David whined, squirming like a poorly potty-trained toddler. “I got the itch, real bad.”

“Fine. As long as you bring me back something. We’ll eat in here while we work.”

Victor found the Westchase audit materials in David’s drawer, under a stack of fantasy baseball stat sheets and an impressive collection of more traditional fantasy mags. By 5:30 he had reorganized the paperwork to enable them to plow through in assembly line fashion. He marveled at his ingenuity and snacked on Little Debbies. Called David and left a voicemail.

After leaving his third voicemail and sending his sixth text message, Victor practiced his attack on the life-sized cardboard cutout of their CEO in a construction helmet. A speech balloon quoted their CEO on the cutout’s right side—“Safety breeds quality, and quality breeds success!”—forcing Victor to go left. The maneuver was ungainly; he couldn’t seem to get the angle right. He came at his CEO from behind, and felt much more comfortable.

Pump Up Your Book and Harris Gray are teaming up to give you a chance to win a new Kindle Fire HD!

Here’s how it works:

Each person will enter this giveaway by liking, following, subscribing and tweeting about this giveaway through the Rafflecopter form placed on blogs throughout the tour. If your blog isn’t set up to accept the form, we offer another way for you to participate by having people comment on your blog then directing them to where they can fill out the form to gain more entries.

This promotion will run from May 6 – July 26. The winner will be chosen randomly by Rafflecopter, contacted by email and announced on July 27, 2013.

Each blogger who participates in the Vampire Vic virtual book tour is eligible to enter and win.

Visit each blog stop below to gain more entries as the Rafflecopter widget will be placed on each blog for the duration of the tour.

If you would like to participate, email Tracee at tgleichner(at)gmail.com. What a great way to not only win this fabulous prize, but to gain followers and comments too! Good luck everyone!

Thursday, May 9 – Book featured at Review From Here

Monday, May 13 – Interviewed at Digital Journal

Wednesday, May 15 – Interviewed at Pump Up Your Book

Friday, May 17 – 1st Chapter Reveal at Book Him Danno

Tuesday, May 21 – 1st Chapter Reveal at As the Pages Turn

Monday, May 27 – Up Close and Personal at Between the Covers

Wednesday, May 29 – Interviewed at Literal Exposure

Friday, May 31 – Book featured at Plug Your Book

Friday, June 21 – Guest blogging at My Book Addiction and More

Thursday, July 18 – Book featured at Beyond the Books

Friday, July 26 – Interviewed at From the TBR Pile

Comments have been disabled.